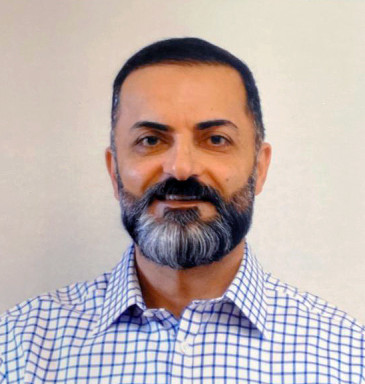 Dr. Kibar was born in Lebanon, the youngest of three siblings. He grew up in a poor family, but very education-oriented. That was thanks to the dedication of his father, who was a teacher and worked as many hours and as many jobs as he could to support the family; and thanks to his mother who was a housewife and dedicated all her life to the family. Dr. Kibar went to medical school at the American University of Beirut and graduated in 1997. He then moved to the United States, where he did his residency in internal medicine at KU in Wichita, and then moved to St. Louis where he finished a fellowship in geriatrics. Finally, he did 6 months of pain and palliative care at the National Institutes of Health (NIH) in Maryland before relocating to Greensburg in 2003. He practiced there until the tornado hit in 2007, when he moved to Wichita and became a hospitalist for almost 4 years. He moved back to Greensburg in 2011. He got married in December 2018 to his beautiful wife, Rana, and they have a son together named Jamal (soft J and mal pronounced like malpractice).

Dr. Kibar has two older sisters and one brother. His mom travels between all of them around the year chasing the best weather each of the locations can offer. He also has a daughter (Eva jo), who lives with her mom in Kansas City, and they all get together twice a year for a family vacation when possible. Dr. Kibar works out every day during weekdays and he loves reading. He regularly volunteers at the Mayflower Clinic in Wichita, and for that he received the "Kansas Health Foundation Health Hero" award in 2018.